This follows an emergency rate hike to 20% in February, an attempt to prop up the ruble and protect against an outflow of ruble deposits following the invasion of Ukraine and tough economic sanctions imposed on Russia.

In today’s statement, the bank said: “Funds continue to flow into fixed-term ruble deposits while lending activity remains weak. This limits pro-inflationary risks and forces monetary conditions to be eased.

USD/RUB rose on the news, hitting 60.500 shortly after the announcement, although the ruble remained at a four-year high against the greenback.

Strength of the ruble

After collapsing in February following Russia’s invasion of Ukraine, the ruble rebounded to become the year’s best performing currency.

However, the capital controls introduced by Russia and its current account surplus generated such a strong ruble – sometimes up 30% against the dollar since before the invasion – that it began to hurt government revenues and to exporters.

Earlier this week, the central bank cut the proportion of foreign exchange earnings that exporters must convert into rubles from 80% to 50%; a measure introduced in response to the sanctions, which froze more than half of its foreign currency reserves. 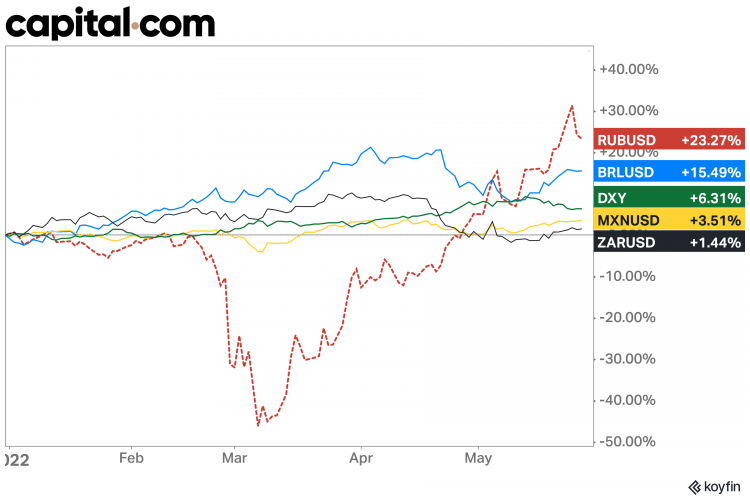 “The Russian Central Bank’s emergency rate cut is a clear signal that the ruble’s remarkable appreciation (+24% since the start of the year against the dollar) is starting to have more negative than positive benefits. for the Russian economy,” said Capital analyst Piero Cingari. .com.

“High interest rates have produced a credit crunch in the economy, and given Russia’s difficult external circumstances, lowering rates is key to trying to encourage consumer and business demand.

“For Russia, a recession this year is inevitable, and the country is experiencing the highest inflation in 20 years (17.8% in April). This is due to the fact that many foreign companies have left the country, which has reduced competitiveness in many areas, as well as the trade sanctions imposed on Russia.

“USD/RUB is extremely oversold and has fallen to its lowest level in four years,” Cingari said.

“Summer is also a time when European gas purchases slow down, so the RUB-for-gas system may offer less tailwinds.”

Russia has demanded that foreign buyers pay for gas in rubles, which countries opposed to the war in Ukraine but dependent on Russian gas supplies have taken various supports on.

What is your sentiment on USD/RUB?

Vote to see the sentiment of traders!

Analysts at FXStreet mentioned they did not expect the rate cut alone to have a significant impact on the ruble or the broader foreign exchange market, as the ruble’s current strength is more technical – driven by trade flows – than indicator of a fundamental perspective.

“The FX passthrough no longer pushes up inflation. Inflation fundamentals in Russia are cooling fast. That’s why high interest rates may not be necessary. High interest rates are also not no longer needed to defend the currency as the ruble is protected by comprehensive capital controls,” they said in a blog post Thursday morning.

“There are few obstacles to bringing the interest rate down to lower levels and supporting an economy that is contracting by around 8% to 10%.”

Bank ING said the sharp rate cut “should be helped by signs of falling inflation expectations” and in an effort to mitigate what Russian economist Dmitry Dolgin estimates to be a 10-15% drop in GDP Russian this year.

The World Bank has predicted that Russia’s GDP will fall by 11.2% this year.

Dolgin forecasts USD/RUB to end the year around 75, as the EU embargo on Russian oil hits in the second half of the year, while Russian resident demand for foreign exchange and imports begins to stabilize .

However, ING also noted that since USD/RUB is mainly driven by Russian trade flows, a sharp drop in rates might not push the ruble down much more in the near term.

What do you want to know

The week ahead, update on major market happenings to your inbox every week.