The most significant influence of the large-scale event of 2018 was on the tariffs: the average price (ADR) for the months of the championship in Moscow was 22,600 RUB, three times more than in 2017 (7 400 RUB). The northern capital also benefited from the influx of demand: hoteliers increased their prices by 30% compared to 2017, to 13,500 RUB.

“July largely continued the trends set in June. Apparently, in the process of preparing for the event, accommodation in Moscow as a hub of the championship was more in demand, but after the championship the demand stopped , there was no extension observed effect: the fans did not stay in the city as tourists to see the sights. This is clearly visible when analyzing the occupancy figures: 89% of the rooms have sold rooms in June in Moscow and “only” 84% in July. In St. Petersburg, the percentage of occupied rooms was roughly the same between the two months: 69.1% in June and 69.6% in July ” , report Tatiana Veller, Head of JLL Hotels & Hospitality Group, Russia and CIS. – “ADR also followed this trend: in Moscow, the average market price for all segments was 20,800 RUB in June and 20,600 RUB in July. The situation is more pronounced in Saint Petersburg: 14,600 RUB in June and 12,400 RUB. in July.”

The record holders for the two-month Moscow hotel market competition were:

“In general, it should be noted that the World Cup championship did not bring the expected results to hoteliers in the northern capital. Judging by the dynamics of the indices in certain market segments (the lower the segment, the higher the price growth in percentage terms), the event mainly attracted price-conscious demand, while discouraging mainstream tourists. Undoubtedly, Moscow took advantage of this, perfectly meeting the forecasts both for the increase in prices and for the growth of occupancy. We can confidently say that this summer’s ADR and hotel occupancy records in the Russian capital are unlikely to be repeated anytime soon, ”said Tatyana Veller.

Despite very different results, the two markets managed to increase room profitability in the first two months of this summer, but at varying levels: in Moscow, RevPAR increased by 224%, to 19,100 RUB, while in St. Petersburg it only increased by 9%, reaching 9,300 RUB.

“We must take into account that in the last four years before the championship – the most active period of preparation of the hotel market of two cities for the event – 5,400 branded rooms have been introduced in Moscow and more than 1,100 rooms have appeared in St. Petersburg. Given this growth in supply, one can characterize the operating results of hotels during the Football Cup as quite satisfactory, as it was a close struggle for a visitor. very “expensive” (in all respects) in the midst of increasing competition and the quality of the offer in the market “, concludes Tatiana Veller. 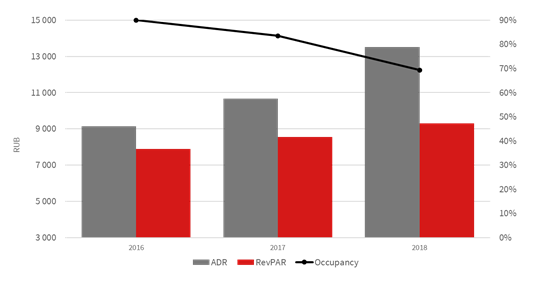