A London hotel whose history links it to the British secret services, espionage and spies of the 1930s, 1950s and 1960s.

St Ermin’s Hotel on the edge of Westminster but was very central to spies and espionage in the city.

Tea time or spy time, the St Ermin hotel is ideal for both.

Staying or visiting is in the only publicly accessible building in London so closely associated with the history of British espionage and espionage. 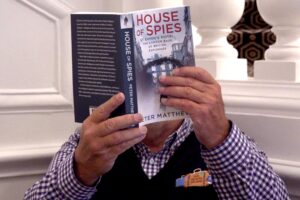 House of Spies, an excellent book on St Ermin’s Hotel by Peter Matthews.

The place where, during World War II, the “SOE” or Special Operations Executive was formed by Sir Winston Churchill.

The SIS or Special Intelligence Service in the 1930s was located nearby and what became MI6 was on Broadway with offices backing onto Queen Anne’s Gate and serving as a low-key entrance for some of the senior officers who worked there.

At the start of the war, the hotel was also the place of ‘guerrilla’ courses, managed in part by MI6.

Even unlikely people like Noel Coward worked there. And, the Queen’s art expert, Anthony Blunt, a notorious member of the Cambridge Five spy ring was also a part of it.

At the time, it was called “Statistical Research Service” in order to maintain its coverage.

In 1940, Sir Winston Churchill who often enjoyed champagne at St Ermin’s. He asked a very special group of individuals to meet at the hotel to “set Europe on fire”.

A mass-produced disposable pistol on display in the hall exhibit.

And it is this group that has become SOE (Special Operations Executive).

The purpose of the SOE was to work often behind enemy lines. Disrupt and disable enemy installations and transport links across Europe. Train and operate spies to work with local resistance organizations.

They first took over an entire floor of the hotel. Churchill held a few key press conferences during WWII next door at Caxton Hall. What better place to have a drink after such speeches than the hotel?

A hairbrush dagger given to the female agents of which there were many.

Once SOE was created, people like James Bond author Ian Fleming worked on it. As are Kim Philby, Guy Burgess, Laurence Grand, H. Montgomery Hyde and Eric Maschwitz. These were among the famous to have worked from offices in or around neighboring buildings.

St Ermin’s was almost an anchor for the secret and spy community. Being surrounded by other secret organizations. Including communications headquarters at Palmer Street, MI9 also at Caxton Street.

The office of the Head of SIS was located at 21 Queen Anne’s Gate. The SIS offices were also located in the artillery mansions on Victoria Street. MI8 was a secret listening post on the roof of Petty France’s former passport office, now demolished, but is now an office of the Department of Justice.

In Kim Philby’s autobiography of the spies “My Silent War”, he wrote about meetings within the hotel.

The hotel bar was regularly used by many different members of the security community from units such as SIS, MI5 and the Naval Intelligence Division. Here, the officers in charge of the case could meet their officers.

In the 1950s and 1960s, St Ermin was once again at the heart of spies and espionage, this time for the Russians during the Cold War.

Not only a safe house, but also a comfortable one!

In its day, the hotel was also used as a safe home for MI5.

Perfect location for tourism too!

And even today, the hotel’s exceptional location is close to the seat of government and Whitehall. It’s a few hundred yards north of Parliament Square. Plus, it’s still close to the new UK Secret Service MI6 headquarters just across the river in Vauxhall.

As well as having a series of cocktails named after the Cambridge Five in the bar. In the hotel lobby is a varied and interesting exhibit of the London Clandestine Warfare Collection. These are genuine items that were used by spies during WWII.

Located so close to Parliament, a vote or division Bell is still located in the hotel. It used to be used to tell members to go back and vote. They had 8 minutes. However, after a few drinks I’m pretty sure not many people would have made it in time!

Division bell still at the hotel.

When registering, you might want to ask the question. Are spies still using the hotel? The question was answered by Tim Fordham-Moss, the director of public relations, said “We would expect that to be the case. But to be honest, what if they were good? We wouldn’t know!

The St Ermin hotel as a holiday base.

Although it has this spy background, it is perfect for visitors and tourists to spy on the area on their own.

Within walking distance are a host of popular tourist attractions.

The Houses of Parliament https://www.parliament.uk/visiting/

The conservative case of postal banking