The European Union has adopted six sanctions packages against Russia since the invasion of Ukraine in late February. Economic exchanges between Russia and the European Union have almost completely stopped, with the exception of gas and oil, which continue to flow to the EU, and food, crops and some fertilizers, which are not covered by the sanctions.

Sanctions now apply to 1,212 people, including Russian President Vladimir Putin, Foreign Minister Sergei Lavorv, several prominent oligarchs and 108 entities, according to the Council of the European Union, which represents the 27 member states. . Half of the reserves of the Central Bank of Russia have been frozen and Russian banks have been cut off from the international payment system SWIFT. Exports of technology, aeronautical engineering, electronics and luxury goods from the EU are prohibited. More than 1,000 Western companies have withdrawn from Russia.

The United States, Canada, Japan, Switzerland and the United Kingdom have also imposed sanctions on Russia. In its live tracking of the sanctions, the German non-profit investigative newsroom Correctiv found that as of July 30, 6,891 measures had been imposed since February. There have never been so many sanctions against a single country.

“The Russian economy is shrinking by 10%,” Borrell said. “They will suffer the biggest recession since the World War or the end of the Soviet Union.” He acknowledged that the European Union remained dependent on energy supplies from Russia, but said that would change in the coming months. EU member states still buy gas from Russia, he said, “but we have halved the amount of imports – we can’t do miracles.” He said the Kremlin could no longer use the revenue to make purchases from the European Union, meaning European technology for Russian tanks was now banned. “They have the money,” he said, “but they can’t buy anything.” 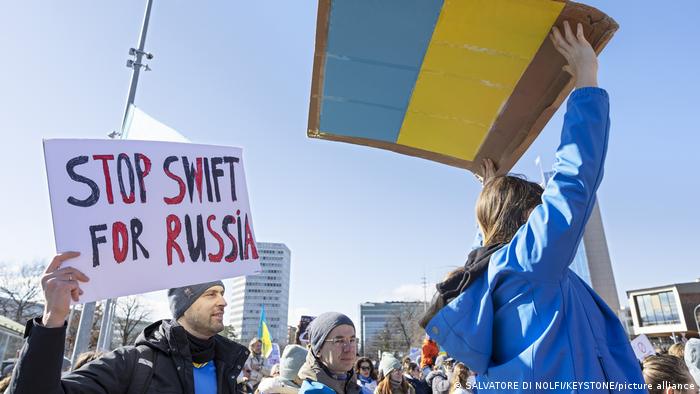 Russia was finally cut off from the SWIFT international payment system

Several studies by renowned universities and economic research institutes on the possible impact of the sanctions on Russia – and on the countries that imposed them – are now available. They all predict a drastic drop in Russia’s economic output in 2022.

Economics researcher Maria Shagina of the London-based International Institute for Strategic Studies predicts a 6% drop, referring to recent estimates from the International Monetary Fund. “Russia continues to sell oil and gas at record prices, and it has built up this war chest, this Russian stronghold, which it had before the war,” Shagina told DW. “So we have this unique situation where, on the surface, Russia is not very affected by the sanctions. But, if we look at the microeconomic level, and in particular the automotive industry and the aviation sector, sales in these sectors have dropped more to more than 80-90% In the long term, we are talking about the structural transformation of Russia, because it can no longer accumulate this Western capital and access Western technology, and it will go through a reverse industrialization. How fast can Russia solve this problem and come and create a new economic model or team up with China, India? Who can provide this is a big question mark.

Julian Hinz of the Kiel Institute for the World Economy said trade statistics showed the sanctions had worked. “The Russian economy is suffering massively from these sanctions, much more than European economies,” he said. “There really is no comparison.”

Hinz said it would be difficult for Russia to produce domestic alternatives to imported products because domestic industry needed preliminary products and technical know-how from abroad. He said the Kremlin would struggle to find buyers for oil and gas no longer destined for the EU and the United States. “The pipelines aren’t there,” Hinz said. “There is some pipeline capacity to China, but that’s only about 10% of what could be sent to Europe at one time. None of that, in terms of capacity, can replace the capacity of pipeline to Europe.”

Borrell said Russia would end up being isolated. “A modern economy cannot function if the link with the rest [of the] economic powers, technological powers are cut off. It will hurt the Russian economy a lot – not tomorrow: the war will continue, unfortunately, will continue. But the economy will suffer a lot.”

The crucial question, then, is whether economic sanctions will ultimately help change the political will of the authoritarian regime in Moscow. Alexander Libman, professor of Russian and Eastern European politics at the Free University of Berlin, is skeptical. He recently told German state broadcaster Deutschlandfunk that Vladimir Putin was unimpressed with the damage to Russia’s economy.

“Sanctions won’t change anything for weeks or months,” Libman said. “You have to be honest: sanctions are an instrument – there is a lot of research on this – that generally does not work. In most cases, sanctions have not influenced the behavior of sanctioned states.”

This article has been translated from German.