By Lawrence C. Saleh
0
0
Reports reaching Kossyderrickent indicate that the ratings for the WARERE BEACH hotel in Nungwi Zanzibar are currently down drastically. (Read more here).

After sharing her stories, South Africans and Nigerians flocked to Google to kill the hotel’s ratings and reviews. Now WARERE BEACH hotel has over 1.2 ratings on Google. Over 4,000 people left their reviews. 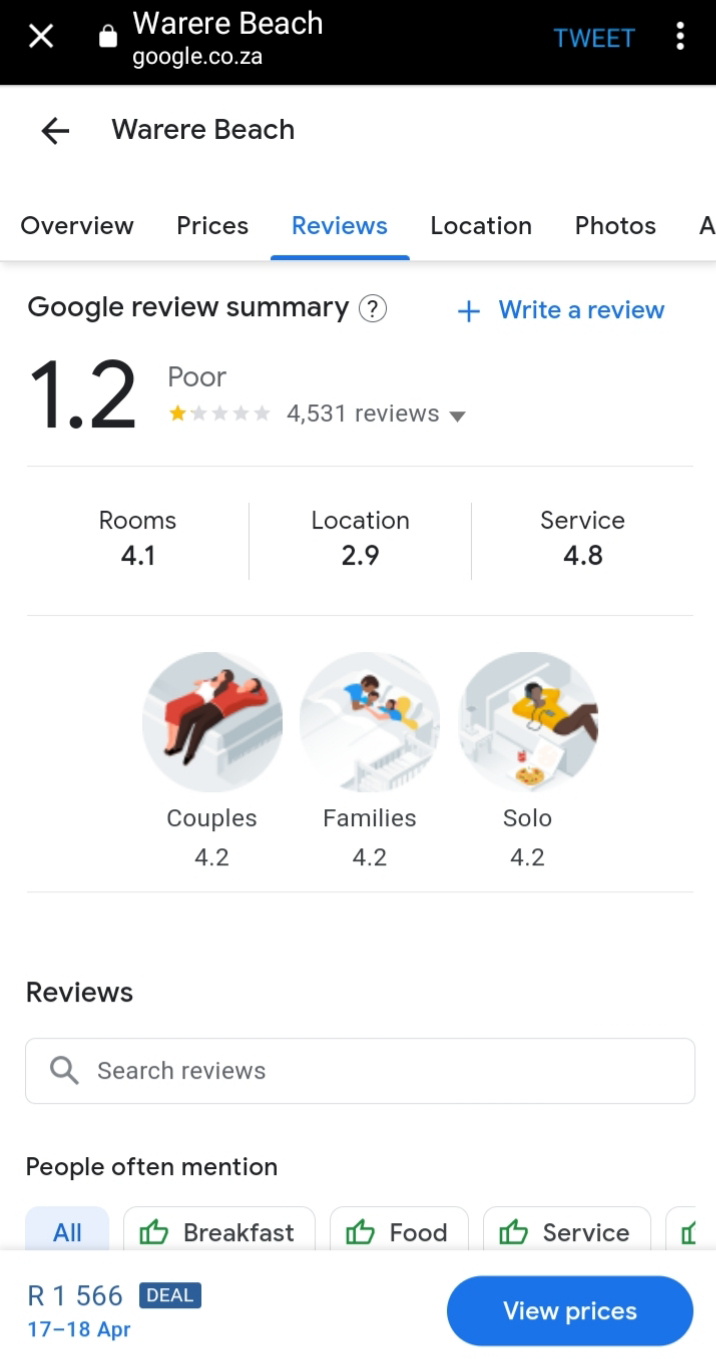 According to her, she had traveled to Zanzibar, Tanzania to celebrate her 23rd birthday on April 16, 2021. On her birthday night, a rapist who spoke Swahili only crawled into her bed as he tried to rape her.

During her struggle, she began to threaten the rapist with the word “HIV”, so that he could leave her. Unfortunately, he didn’t really leave her, until she told the rapist to get a condom.

The rapist came out of his room to take the condom and that’s how Zainab Oladehinde went to the room in which a Russian couple had stayed. She told everything to the Russian couple.

The next morning, she reported the horrific incident to the manager, who informed her that they had gone to Nungwi Police Station. Unfortunately, the police station kicked her out after saying that no penetration had been done to her.

“It is high time that I recount my horrible experience in Zanzibar as a young solo traveler.

This incident happened a year ago in April 2021 but I could not talk about it because I have been in therapy for a year to heal from the psychological trauma of this experience.

“was the most painful and traumatic experience I’ve ever had in my entire life. In fact! I’m glad I’m still alive today to share my story.

MY 23rd BIRTHDAY BIRTHDAY HOLIDAY HAS BEEN BAD IN ZANZIBAR, TANZANIA.

“On April 15, 2021, I flew from Lagos, Nigeria to Zanzibar, Tanzania for my 23rd birthday and was extremely excited about it.

“I had reservations about going to a foreign country as a solo traveler, but none of my thoughts would have prepared me for what I ultimately saw and experienced in Tanzania.

It was a 2 day flight as we had a 1 day transit time in Addis Ababa Ethiopia. I arrived at my WARERE BEACH hotel in Nungwi Zanzibar on April 16, 2021 in the afternoon around 4pm where I had booked 6 nights accommodation.