With the 2022 FIFA World Cup kicking off on Sunday, November 20, the hospitality industry in Qatar is looking forward to a nice uptick in performance from this “mega event” as fans around the world are ready to visit the Middle East for a match (or several) of football.

Qatar has been preparing for this moment for years, in particular by developing the hotel offer on the market. Inventory growth continued until the last minute with over 3,000 rooms added to total supply in the last three months.

While this growth in hotel supply is not unique for a World Cup host market, the Qatari version of the World Cup is unique for several reasons.

One of the main differentiators is the requirement for newcomers to have at least one match ticket to enter Qatar during the group stage. From December 2, fans will be allowed to enter the country without a ticket. The exception to the rule during the group stage is that up to three fans can enter by invitation from a ticket holder, but an entry fee will apply for those 12 and over who take this approach. These rules have been implemented to ensure that all ticket holders can book accommodation for the dates required. Even with this policy, hotels are still expected to experience significant levels of demand, which will lead to significant growth in the average daily rate (ADR).

Another difference in Qatar is the short distance between the host stadiums. A total of eight stadiums, in and around Doha, will host the 64 matches, which is likely to create an exciting atmosphere for the participants. Proximity to stadiums means that much of the hotel demand will be concentrated in the same area.

Increase in bookings as the event approaches

Using STR’s Forward STAR data from November 7, Qatar’s occupancy on the books has increased significantly since our last update. Last month, the metric averaged 70% from November 20 to December 18 with a peak of 83% on November 26.

The latest data, however, shows an average occupancy rate of 85% during the event period, with the metric not dropping below 66.3% and peaking at 90.5% on November 25 – the day Qatar takes on Senegal and the United States takes on England. . The second highest occupancy level in the books (90.2%) occurs on November 26, when neighboring Saudi Arabia faces Poland and Argentina faces Mexico.

This forward-looking data is now higher than the updated occupancy for the comparable period in 2019, where the metric remained at at least 65% and peaked at 86%.

We can also expect book occupancy to increase further for later event dates as fans wait for their teams to get out of the pool game before committing to travel. As this is the first post-pandemic World Cup, pent-up leisure demand will surely put on a show during this ‘mega-event’ period.

Hoteliers likely to score on ADR

The last FIFA World Cup, which took place in a pre-pandemic world, took place in Moscow and other Russian cities. How did the ADR shape up for the latest “mega event”? Find out in our previous blog update. 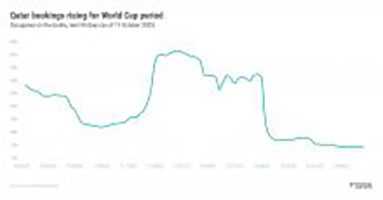 Over the coming month, STR will focus on updated data for the World Cup period, not only in Qatar but in surrounding destinations. Be sure to check out our Data Insights blog for further updates.