“The McDonald’s system has demonstrated a remarkable knack for cultivating the right leaders right now,” McDonald’s CEO Chris Kempczinski said in a message to the system. Ozan and DeBiase were cast in their roles in 2015.

“Kevin and Francesca are long-time veterans of McDonald’s, with more than 40 years of combined experience in the system and careers uniquely tailored to their positions on our global leadership team,” Kempczinski said. “They were well known and highly respected, and their appointments – Kevin as Chief Financial Officer and Francesca as Global Director of Supply Chain – coincided with the multi-year revitalization of our business which led to our position of strength. current.”

Ozan, left, has worked at McDonald’s since 1997, when he joined Ernst & Young.

“Kevin leads with an incredible combination of head and heart,” Kempczinski said. “He has helped guide our system through so much over the past seven years – from onboarding two CEOs, to navigating COVID, to activist investors and, most recently, our exit from the Russian market. . Kevin has seen and done it all.

In his new role, Ozan will continue to lead the strategy team and lead several strategic initiatives. He plans to retire from McDonald’s by mid-2023, Kempczinski said 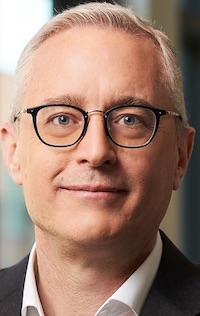 Borden, left, who is currently president of the international division of McDonald’s, has been part of the system for 30 years.

Borden and his family will move to Chicago, he said.

Gross will succeed DeBiase, who has worked at McDonald’s since 1991.

“The strength and resilience of our supply chain is the cornerstone of our competitive advantage and a hallmark of Francesca’s leadership,” Kempczinski said. “The strategic relationships Francesca has forged within the supplier community – based on transparency, inclusion and trust – have been key to our success in creating a best-in-class supply chain that makes the envy of our industry, and so many others.”

Gross, left, has worked with McDonald’s for 29 years, Kempczinski added.

“She had already been part of the system for several years, having managed transport and logistics at HAVI,” he said. “At McDonald’s, she first managed the supply of several national product categories before taking on strategic supply chain initiatives in 36 distribution centers. Most recently, Marion was responsible for executing the strategic direction of McDonald’s supply chain in the United States and Canada.

Gross’ successor will be named before the September transition, he said.

Kempczinski said Katie Fallon, who served as McDonald’s first global impact manager, will leave the company from July 15. As the company searches for Fallon’s successor, he said Ozan will oversee the global impact team.