The euro has been hit recently on two fronts:

Christine Lagarde spoke last week to the European Banking Congress in Frankfurt. She said while inflation is unwelcome and painful, the ECB should not rush into premature tightening. In addition, she added that inflation is likely to increase until the end of the year. October inflation was 4.1% year-on-year. The ECB is targeting 2% inflation! However, she said that “the conditions for raising rates are very unlikely to be met next year.” The ECB’s Emergency Pandemic Program (PEPP) is expected to expire at the end of March 2022. At the next ECB meeting scheduled for December 16, members will provide undated growth and inflation forecasts. At the November meeting, Lagarde noted that she expects the PEPP to end as planned and members will discuss possible new bond buying alternatives at the December meeting!

Everything you need to know about the ECB

The coronavirus is back in Europe, in what some are calling a 4th wave. Austria has closed its doors for 20 days, starting today. Germany is ready to reimpose restrictions and has not ruled out new containment! In addition to Austria and Germany, new records are set for new daily cases of Covid in the Czech Republic, the Netherlands and Belgium. Not only do Europeans need to worry about the virus, but now the rioters are in force and are opposing social restrictions and blockades. Will there be other blockages to come?

One more thing to watch this week in Europe: the strengthening of Russian military forces on the Ukrainian border. Are they going to settle in Ukraine? Recall that in 2014, Russian forces annexed Crimea to Ukraine. The euro could move on uncertainty.

Economic trends appear to be moving in the opposite direction in New Zealand, although inflation is also high. At the last RBNZ meeting, the committee said it expects inflation to rise to 4% in the short term and fall to 2% in the medium term. Business inflation expectations for the fourth quarter reached 2.96% from 2.4% previously. For the third quarter, the reading was 2.27%. The change in employment for the second quarter was + 2% against + 0.4% expected and the unemployment rate fell by 3.9%. at 3.4%. Expectations are that the RBNZ will increase by 25bp. But traders are also speculating that they could rise by 50 basis points!

In March 2020, EUR / NZD peaked at 1.9932 and has fallen since. However, since the start of 2021, the pair has been moving in a side channel between 1.6307 and 1.7152. As expectations for the ECB to hike interest rates over the next year subsided, EUR / NZD started to fall. On October 19, the pair broke below the channel. As the pair reached the 61.8% Fibonacci retracement from the April 2015 lows to the March 2020 highs near 1.6285 and the RSI moved into oversold territory, it slipped into oversold territory. consolidated, forming a flag pattern. On November 16, EUR / NZD went under the flag and is now aiming for 1.5575. 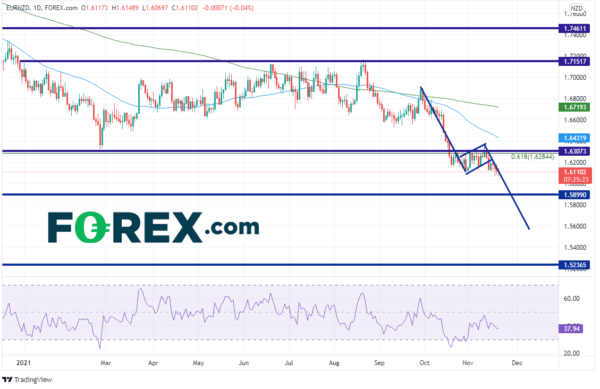 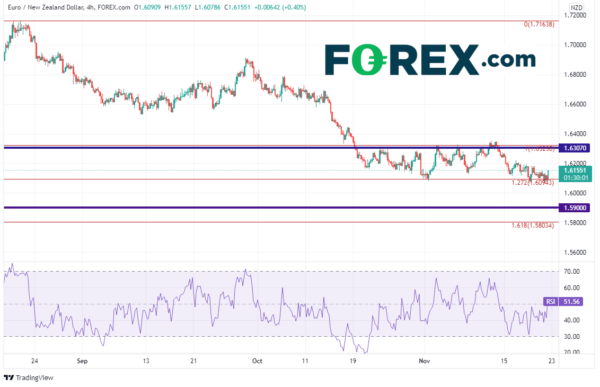 If Christine Lagarde and the ECB continue to be accommodating ahead of the December 16 meeting, the euro should continue to decline. And, if the inflation forecast at the meeting is higher and the growth forecast is lower, that should add pressure on the euro as well. The RBNZ meets on Wednesday. The question is not whether they will increase rates, but will they increase by 25 or 50 basis points? Either way, given the difference in interest rate policy and lingering coronavirus concerns in Europe, it is possible that EUR / NZD is heading towards the flag target!