The opening of Nash Krai (“Our Region”), a luxury Russian restaurant, in Damascus several weeks ago sparked outrage among Syrians on social media over the country’s dire economic situation.[1] The criticism came after it was reported that the restaurant was owned by Luna Al-Shibl, adviser to President Assad and former Al-Jazeera presenter, who is on the US sanctions list.[2] and who, in media interviews, have often urged Syrians to be steadfast and patiently endure the economic crisis in the country.[3] For example, in a July 19, 2021 interview about Syria, Al-Akhbariyya Al-Shibl TV said, “We have no choice but to be steadfast. Our role right now is to endure, as the military did.[6]

The criticism, mostly voiced by Syrians living in areas under Syrian regime control, focused on the discrepancy between Al-Shibl’s statements and his opening of a luxury restaurant where the cheapest dish would cost 100,000 Syrian pounds (about $25), close to the average monthly salary in the Syrian civilian sector.[5] Many of the responses were sarcastic. Some, for example, asked if the restaurant served “Constance” portions and others mocked Al-Shibl for being known among Syrians as “Ms. Constance”.

In fact, this is not the first time that people have been outraged at the discrepancy between Al-Shibl’s public statements and his conduct. For example, she was criticized after attending Assad’s July 2021 swearing-in ceremony wearing expensive fashion brands.[6] Her statements to Russia Today on January 18, 2022, in which she denied that Syrians are starving and freezing, also drew condemnation and accusations of disconnecting from the people.[7] 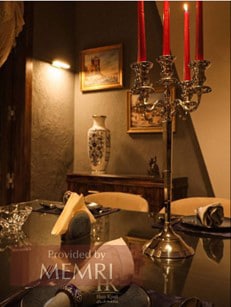 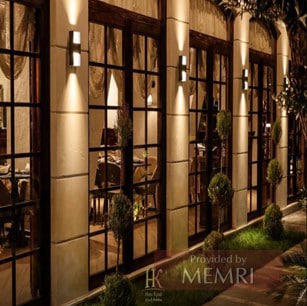 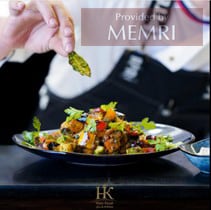 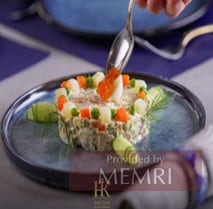 This report reviews some of the responses to reports of Al-Shibl opening the luxury restaurant in Damascus.

Syrians living in areas under the regime’s control have been scathing in their mockery of Assad adviser Luna Al-Shibl, who, as noted, is known for encouraging Syrians to bravely emerge from the economic crisis. They criticized her for opening a fancy restaurant when many Syrians are struggling to make ends meet. Facebook user Olaa Akiell, from Jabla in Latakia Governorate, wrote: “Toughness, toughness, toughness…! You have given people headaches by calling for toughness. The biggest and toughest restaurant opened its doors, owned by Luna Al-Shibl and her husband Walid Sa’ati. The restaurant specializes in Russian cuisine. The staff, the food, everything is imported. Nothing comes from Syria. And the best of all, it’s sold out for the coming week because it’s so popular. Congratulations on the cultural revival.”[8]

The “Syrian People’s Hardships” Facebook page, which tracks the economic situation in areas under the regime’s control, writes sarcastically: “Ms. Luna Al-Shibl has the audacity to open a Russian restaurant for the upper classes, despite the dire situation She cleverly circumvented US sanctions by hiring an all-Russian team of employees and chefs to run the place, just like our wise and smart government circumvents [the sanctions] by ceding facilities to the Russians… Honestly, the lady is a first-class patriot. She invested in Syria despite all the sanctions and the uncertain future of the country. She truly deserved the title of Mrs. Steadfastness…”[9]

“Do they make consistent deliveries?”

The message quoted above elicited many responses from Syrians. User Souzan KhairBaik from Tartous asked, “Do they do firmness deliveries??!!” A user named Jafa’ar Mohammad from Homs similarly asked, “Do they serve consistent portions in the restaurant?”, and user Lolo Khateeb wrote, “The faithful [Syrian] people will surely be able to eat in this restaurant.”[10] 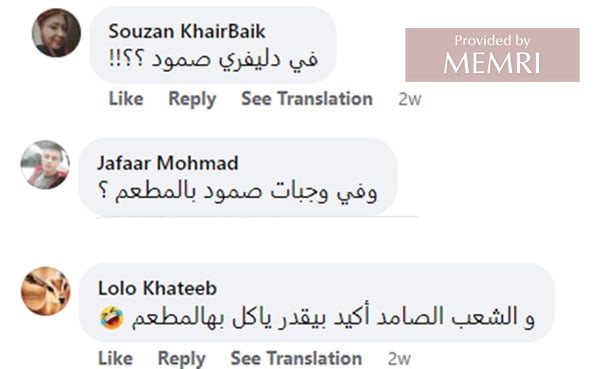 Syrian Opposition Activists: A Single Dish In This Restaurant Costs More Than A Syrian’s Monthly Salary

Many responses on social media were made by Syrian opposition activists, whose criticisms were similar to those voiced by regime supporters.

Opponent Muhammad Ja’afar Al-Shardoub wrote on Facebook: “A Russian restaurant has been opened in the poorest capital in the world at a cost of tens of millions of dollars. It employs some of Russia’s most famous chefs and all dishes are Western. Media personality Luna Al-Shibl, adviser to the president, who has long called on the miserable Syrian people to be strong and endure suffering in order to confront the great global conspiracy [against Syria]. [She also promised] that Syria would eventually defeat Zionism, imperialism, the forces of reaction [i.e., anti-Assad Arab countries] and terrorism. From the window of her palace, she saw people queuing outside bakeries and cars queuing for gasoline, and said to them, “Patience, O Syrians. You will reach paradise’… French Queen Marie Antoinette once said to the starving people of France: ‘If you don’t have bread, eat cake’, and today the President’s adviser Luna Al-Shibl says to the starving Syrian people: ‘If you don’t have bread, eat caviar. Note that a single dish in this foreign restaurant costs more than the [average] monthly salary in Syria.[11]

A Syrian opposition activist on Twitter, @IBRA_SYR, wrote: “Mrs. Steadfastness, Luna Al-Shibl, opened a fantastic restaurant in the center of Damascus at a cost of millions of dollars, while you poor citizen Syrian, must be firm…”[12] 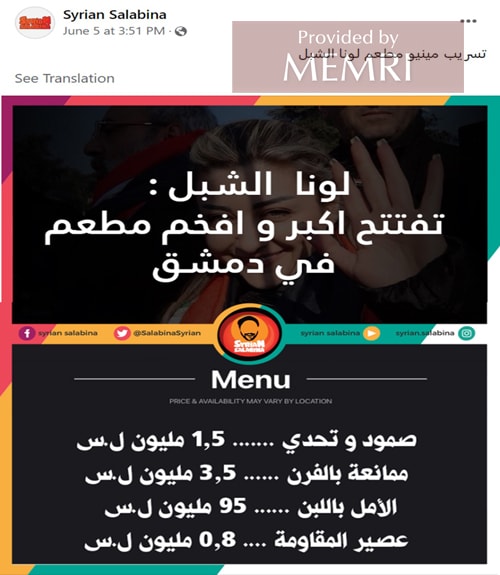 Syrian cartoonist ‘Ali Farzat was even more scathing in his review, describing the restaurant as a slaughterhouse in which President Bashar Assad and Luna Al-Shibl serve plates of bloodied bodies and body parts of Syrian civilians and children . 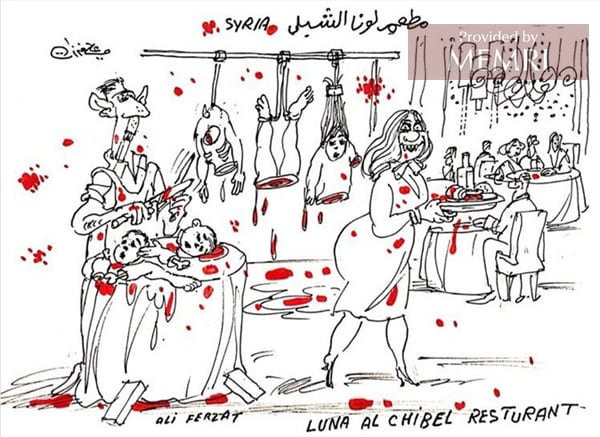 Syrian journalist: the official spokeswoman for firmness declared herself a profiteer of war

‘Abd Al-Qadir Al-Manla, an actor, artist and media personality identified with the Syrian opposition, wrote on the opposition website Syria.tv that the restaurant will be used by Russia for clandestine activities such as money laundering. money, or as a war room: “After hearing the news of the opening of the Nash Krai restaurant, owned by Luna Al-Shibl, in the center of Damascus, we will not be surprised if we learn that the Minister of Foreign Affairs of the regime is about to open a large flea market in Iranian clothing, that the minister of tourism has opened a high-end real estate agency, or that the minister of culture has opened a nightclub… Let the war profiteers , in the service of the gang that rules Damascus, begin to reveal their true selves by spending some of the money they looted on projects that have nothing to do with their area of ​​expertise or their official jobs and positions or these investments do they have another aspect and another function, having to do with the supreme interests of this gang and its strategic interests? objectives, which are to complete the plan of destruction and expulsion?…

“The media and social networks were in turmoil over the news [about the opening of the restaurant] several days ago. [This news] surprised most Syrians and was the subject of jokes, mockery, anger and criticism, but it struck the regime’s supporters like lightning. Because here was the official spokesperson for firmness and resistance formally declaring herself a profiteer of war and an investor in the [Syrian] crisis. The only thing that interests him are the needs of the velvet class, namely the class of his fellow profiteers, who are the only ones who can [afford] eating in his restaurant… Al-Shibl has created a problem for supporters of the regime, who for many years have pointed the finger at certain opposition-identified figures who have opened restaurants abroad, claiming that they are the best proof that the [Syrian] the revolution was a plot against the Syrians…and stripped them of their wealth. But now Al-Shibl has come and robbed them of this trove of decisive evidence against the revolution…

“The restaurant will likely be a hub of Russian activity. At best, it will be a hub for laundering profits from arms sales, [but] it cannot be ruled out that it is a hub of espionage or another gathering place and war room of the Russian intelligence services [services]since neither Putin nor Luna Al-Shibl needs the profits from this restaurant…”[14]